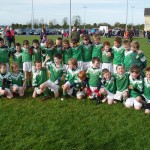 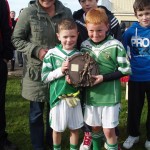 The Under 9 Managers and Players 2011

This panel of players played in the Under 10 South Board league as a 3rd team from Moorefield.
They played each team in their league twice (Home and Away). They came up against some strong Under 10 Teams such as Rathangan, Castlemitcheal, St. Laurences and Ballymore, but managed to win more than half the matches they played. The most memorable match had to be the evening we travelled down to play Castlemitchell. They were unbeaten in the League and had beaten Moorefield at home. Moorefield played the best game of football that I ever saw these group of lads play, they worked hard for each other and always tried to pick a good pass. They took some excellent scores to win the match.

At the end of the Under 10 League there was a Blitz Day in Hawkfield where Moorefield played Ballymore and ran out winners.
Later in the year they also played in the South Board Under 9 League, which again was hard but the players managed to go through again winning most of their matches. The format for this League was each Club (Moorefield, Round Towers, Suncroft,and Raheens) hosted a Blitz where each club had 2 teams and Moorefield 1 and 2 played against Suncroft, Round Towers, and Raheens.

A big thank you to the mentors Mick Meehan, Gerry Moran, Stephen McDonald and Owen Morrisey for their hard work throughout the year.


This entry was posted in Team Profiles, Under 9. Bookmark the permalink.